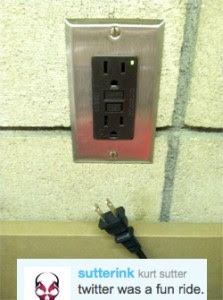 With Sons of Anarchy showrunner Kurt Sutter’s announcement on Saturday that he would be “pulling the plug” on his now deleted Twitter feed, it is the end of an era (albeit a short one). When I looked at Sutter’s twitter feed in the first installment of this series last fall, I posited that there might come a time when Sutter’s brash online persona would overshadow his own show, and it seems that we have reached that point. However, while it was perhaps inevitable that Sutter’s lack of a filter would result in his Twitter account becoming a liability, I can’t shake this feeling that the rise and fall of “@sutterink” has more to do with public perceptions of Twitter than with his actual commentary.


In recent months, online media outlets have taken a sudden interest in Sutter’s Twitter feed, with sites ranging from The Hollywood Reporter to TMZ taking series of tweets and presenting them as news. It started in July when Sutter went on an extended rant regarding the Emmy nominations (where his show, including his wife Katey Sagal, was ignored), and it continued last week, when Sutter shared his opinion on the recent controversy surrounding AMC and The Walking Dead showrunner Frank Darabont. TMZ shared the former story with the headline “’Anarchy’ Creator PISSED Over Emmy Snub,” while THR.com pitched the latter tweets as “‘Sons of Anarchy’s’ Kurt Sutter Goes Off on Frank Darabont’s Firing,” and both stories were picked up by multiple outlets.


What’s interesting is that Sutter’s rants have not really become more prominent in the past year. As I noted in my initial post, Sutter has ranted about the Emmys before, just in the form of a blog post instead of a series of tweets. Sutter has even recently added outlets for his rants, including a YouTube series entitled “WTF Sutter” that features the same kind of profanity-laden honesty his fans have come to expect. However, Sutter’s blog has not been subject to the same media scrutiny, and these outlets have also ignored his YouTube videos.


In what Sutter has pitched as his final tweet, he suggests that Twitter is simply the wrong outlet for someone without a filter. He writes that “ultimately, me having an instantaneous outlet for my darker impulses is not a good thing. i’m a guy who needs filters. lots of them.” In his latest WTF Sutter video, where he foreshadowed his departure from Twitter, he expands on this logic before answering some fan questions:
Sutter’s departure from Twitter says less about Sutter and more about the ways in which Twitter is perceived by media outlets and by the public at large. Over the course of the past year, we’ve seen the media start to notice Twitter, and they’re starting to find ways to use it: the service has become a resource for cable news outlets (which Jon Stewart has criticized on The Daily Show), and I’d argue that the increased attention to Sutter’s tweets is a product of the media’s search for the best way to leverage this form of social media.


However, I’d also argue that the way Sutter’s tweets were presented is a reflection of a public understanding of Twitter as a soapbox. Sutter’s lament in his YouTube video is that he is no longer able to have a “conversation,” which might refer to the fact that the reports about his tweets rarely include any discussion of the context in which they appeared: TMZ wasn’t talking about the people on Twitter who were encouraging Sutter’s comments about the Emmys (including critics and other showrunners), and The Hollywood Reporter wasn’t interested in the fact that Sutter retweeted a number of critical responses to his AMC-related comments in the days following his initial statements.


I would not necessarily say that this has resulted in Sutter’s comments being taken “out of context,” because even he argues that he has not necessarily been misrepresented by these reports. What I would say is that Sutter’s comments have been filtered through a perception of Twitter as a place for rants and provocations, a place where a Twitter feed is a direct glimpse into the Id (as reflected by coverage of the Anthony Weiner scandal). The story isn’t the actual nature of Sutter’s comments or what they say about the Academy system and the situation at AMC: rather, the story is that someone famous has said something controversial in an outlet that has become known for its controversy, and that has now become publicized based on this perception.


As someone who has written about Sutter’s tweets in the past, I am not suggesting that his tweets should be beyond reproach: he is responsible for what he says within this online space, and I think holding him accountable for that is perfectly reasonable. However, these news reports aren’t interested in holding him accountable; they’re interested in exploiting his comments as gossip, turning them into news without exploring the context of the conversation or even considering their veracity.


Kurt Sutter hasn’t changed since his Twitter feed first appeared, or since my first Antenna piece about it was published. What has changed is the amount of attention paid to Twitter outside of Twitter – Sutter has four times as many followers now than he did then, but that doesn’t take into account (as Sean Duncan noted in the comments on the initial piece) the people who are made aware through outside sources reporting these tweets. And now that this includes major media outlets interested in tapping into the zeitgeist, public figures like television showrunners must reconcile their comments with a mass media that is still trying to figure out what Twitter is, what it’s used for, and how they can best exploit it.


And when you’re Kurt Sutter, that’s a situation in which pulling the plug might be the only viable option if you don’t want your Twitter feed to become a story in and of itself. While it’s possible that Sutter is simply posturing, and that this is a bluff designed to reframe the media narrative (and draw the sympathy of his followers who are pleading him to reconsider), it nonetheless reflects on the changing state of Twitter as discourse.
Posted by Anonymous at 8/14/2011 06:07:00 PM

I have no doubt that Kurt Sutter considered his actions in stopping his twitter comments. I applaud his choice to be the adult in this. It doesn't help me feeling sad about not seeing new posts from him, but if this will at all help him keep his integrity and style as a writer and producer/showrunner then I am behind him. I have never had a motorcycle and I was drawn instantly into the family of the club on SOA. Fantastic characters liviving real lives (even if they aren't mine).

Sorry to see you leave,but I get it.The powers that be, I am sure, have given you endless amounts of shit because your opinion "offended" someone.Well to the people you offended--grow up you little fucking punk bitches,when you make choices you need to understand that your choices are not going to be popular live with it ,be an adult and stand by your choices,dont complain that somebody is being mean when they think your choices are bullshit and/or bias.We are allowed to voice our opinions whether they offend someone or not.

Now a little shameless slobbering on my fave showrunner.Kurt,Fuck'em the Emmy bitches are bunch touchy feely wanna feel good network hummer givers(over the top? maybe).
Everything I have watched and devoted my time to become interested in has shown the duealty of the human animal,the conflict between what needs to be done and what is right or popular. The need of the human animal to survive is very interesting.What you have done with SOA shows the 2 sides of everyone,taking care of your own but doing things that are questionable to reach that end.

Your angst and brutal honesty makes your average punk bitch shake in their shoes,I will miss the daily rants.I hope the same shit doesnt come down on WTFSutter.

Ahh! Someone else with eyes to see what the fuck was/is goin' on with the entertainment media whored.

Y'know, back in my reporting day, had a reporter - teevee, newspaper, radio - taken just a few items overheard and used 'em the way those asshats in these days did would've been fired and ostraciszed.

Now the fucktards have half an hour of tee vee time (syndicated).

Yet, when you come down to it, it is us, the public, who are also to blame for this. We read the blogs and talk about 'em; we favorite the websites; we watch the tabloid trash tee vee shows; we retweet their twats and repos their links on our FB pages. In effect, we have given them free advertising and encouraged them to misbehave.

So the fault does not entirely lie with 'them', but with 'us' as well.

And that's what needs to be changed in us, the public. We need to turn our backs on these muckrackers. Unfavorite them. Ignore their twats. Not publish their links on our pages.

Ignorance is bliss, and in this case, ignorance could turn out to be a good thing. Likely they're not going to have as easy a time getting followers now that they've lost their prime source of news.

Kurt I love your candor and always have....totally understand as another dealing with filters HA...carry on with your greatness... PS--you look great! Clearly K$fam keeping you happy xo

Great piece of writing by Myles !!