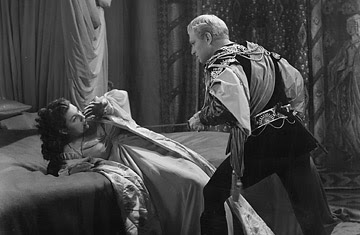 As I close in on writing the last three episodes of the season, I am beginning to clearly see the final act of Sons.  This awareness took me back to the Hamlet archetype that inspired the show and I'm trying to envision how much of the series will eventually come back around to that homage.
Some.  I think.
There are big character shifts in season four.  We knock people off the fence and we make them choose.  The finale for season four will feel like a series end in a lot of ways, but the truth is, it will create a new beginning.  The beginning of the end.  Season five and six, if I'm lucky enough to get, will explore that new dynamic.  Season seven will be all about the fall of heroes and the rise of men.
As far as potential shit I may actually steal from the Bard, it comes down to themes.  I will definitely continue to play out the ghost of Hamlet's father theme, the conflicted son theme and the plotting mother theme.  As well as some others.  And there may even be a few narrative lifts from the Shakespearean playbook as well.  I won't spoil those.  I can tell you this, the show doesn't end in a pool of blood with all players dead.

That will happen in season six... just kidding.  I think.

And in light of my recent social media extraction, I thought I'd leave you with this from Act 1, scene 3:

"Give thy thoughts no tongue."

I've stopped Twittering, as perhaps you've noticed.  Some fans are disappointed, but most people who know me and care about me are relieved.  Very relieved.  So, I deactivated my account, then I logged on to open an anonymous account and realized that by logging on, I reactivated my account.  So SUTTERINK is there, it's just dormant.

Which is kinda prophetic.  You know?

I'm getting many requests to rejoin Twitter.  People are calling me a quitter and a coward.  I just heard that Damon Lindelof, Brent Lang and Ryan Murphy want me back on.  But here's the curious thing.  My Twitter account has gotten a lot of buzz over the past few months and yet the amount of my followers basically stays the same.  You'd think my numbers would be blowing up.  But they don't.  Meaning that all the hype is kinda bullshit.  Maybe here in LA it's buzzy, but to the rest of the world, no one gives a shit about a television writer.  All they care about is the writer's work.  This is a double edged sword for me.  Part of me is relieved to know that most people don't pay attention to the ridiculous coverage and judge me by my talent.  Then a part of me, let's call it my big ego, is pissed off that people don't pay attention to the ridiculous coverage.  C'mon, man.  I'm being smeared in tiger blood here, where are my numbers?

So here's the deal, at the rate of my added followers, I should hit the QUARTER MILLION mark in 2027.  That's when I'll re-engage Twitter, 250,000 followers or 2027, whichever comes first.  Either way, by then I'll be retired and won't give a shit.  I'll be tweeting about colostomy bags and weed killer.  So until then, the little bird on my computer remains silent.  And the rest of the world could care less.