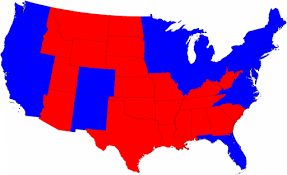 Yesterday was my little girl's fourth birthday so Katey and I took her to Disneyland.  As I walked around the happiest place on earth, I watched people.  Mickey draws folks from all walks of life.  It really is a great place to observe a cross-section of these United States.  Then I saw the flag over downtown Disney flying at half-mast and was reminded of the tragedy in Tuscon.  I began watching people in a different light, wondering about their beliefs and values.  Were they conservatives?  Where do they land on Roe v. Wade?  Do they attend church?  Then I reflected on all the folks I've met (via social networks and in person) through Sons of Anarchy over the past few years.  They are average citizens with average struggles.  They are Christians.  They are Jews.  They are agnostic.  They are Republicans.  They are Democrats.  They are Independents.  They are apolitical.  They are all decent, hard-working people brought together by a simple television show.
I've had this idea brewing in my head for awhile and now seems like the right time to explore it.  It's a simple idea, exploiting a basic function of our civilization -- communication.  It's called Red and Blue.  The basic concept is this: We go to cities throughout the country, some in Republican states, some in Democratic states.  We sit down with a panel of Liberal citizens and Conservative citizens and we just talk.  A moderator conducts an open forum that allows civilized, respectful communication between men and women with different beliefs and similar struggles.  So it's not just about debating our differences, but also engaging in discussion about how we are all the same.  This is real talk, about real issues, not hyperbolic buzz points that the media and politicians say are the issues.
I believe that the biased media (both left and right) is creating this great divide in this country.  That the conflict between citizens is not as great as we are led to believe; it is clearly being exploited to expedite an agenda.  That exploitation fuels events like the ones in Tuscon this week.  I'm not saying it made him pull the trigger, but it helped connect the distorted dots in his mind.  I applaud Jon Stewart for his attempt to out those extremities with his Rally to Restore Sanity.  If we, the people, leave it up to the media and the politicos to determine how we are divided, that division will grow and it will continue to generate more drama, more hate, more pain and more death.
Yes, I'm a bombastic liberal Hollywood writer who makes a lot of money, but this is not about my agenda or any one's agenda.  I put this pitch out here because I have no desire to profit from this concept and I am looking for people of the same mind.  Producers, production company, talent and networks who would be willing to forgo their fees for the greater good.  Other than the cost of production and airtime, no one should profit from this experiment.  When money and power are extracted from the equation, esteem is the driving motivator.  This could be an extremely esteemable act.  I am looking for people who are willing to put principles before personalities and help us heal.
I'm not sure what happens now.  This post may die on the vine and I'll just put it in my ever-growing "ridiculous idea" folder.  But if industry people (producers, talent, union-sanctioned production companies, networks) are legitimately interesting in helping me make this a reality for no pay, no career-advancement, no glory, then they can contact my reps at ICM and we will begin the process.  If you are not someone in the parenthetical category above, you can simply reply to this blog post.
I'm not delusional.  I don't think a project like this can change the tide of ill-will, but I think anything that generates awareness is a start.